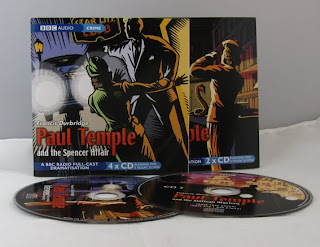 Have you met this dashing chap and his lovely lady wife? I’d never heard of them until I heard an episode broadcast on Radio 7 one evening during the ‘Crime and Thrillers Hour’, which starts every workday evening at 8pm, and now I listen to it if ever it's on, even if I've heard the story before. (If you are in the UK and like old radio programmes, be sure to check the schedules regularly. Listeners outside Britain may be able to hear some of the programmes via the BBC Radio 7 website.)

Written by Francis Durbridge, the Paul Temple radio dramas ran from 1938 to 1969. The radio programmes became so popular that films and television series were made of the Paul Temple stories, but I haven’t seen those so cannot comment. The films are very high on my wishlist! I will not be watching the German animated series made not too long ago starring Anthony Head – I fear modern techno-silliness will have crept in.

Paul was a crime novelist with a genius for getting caught up in glamorous mysteries and assisting the police, and Steve his wife was always on hand to help. Steve is a Fleet Street journalist according to the box of the CDs I bought, but there’s very little evidence of that in the stories I own. Given how many years the programme was broadcast, it’s possible that Steve acquired her job later on. You could liken them to Agatha Christie’s Tommy and Tuppence or Dashiell Hammett’s Nick and Nora, as there are plenty of nightclubs and glamorous locations populated by the rich and nefarious, but there aren't any feats of superhuman physical skill or foolish gadgets like in spy stories.

The plots aren’t especially complex, either usually centred around the hunt for a missing object or a single scrap of information that will provide the key to a murder or three. For example, in Paul Temple and the Spencer Affair, much of the plot is centred on the search for a missing record, 'My Heart and Harry'. If that all sounds a bit boring, well, it isn't: these are quite human characters and all the better for it. Waiting while Steve tries to claim a parcel someone else left in a nightclub cloakroom while many suspects are in the building can be just as tense a time as watching a gang of super-spies try to stop The Bomb (Or Whatever) That Will Destroy The World in some unbelievable modern film or telly programme because you can put yourself in Steve's shoes.

Unlike Agatha Christie’s Tommy and Tuppence, Paul and Steve never seem to age, and unlike the film Nick and Nora they mercifully never have any irritating children. A number of actors and actresses played Paul and Steve; Peter Coke and Marjorie Westbury are the most famous and definitely my favourites. It is now possible to buy some of the extant recordings on BBC CD. do watch out if you're buying the CDs, though. If you want the radio broadcasts, make sure you get a cast dramatisation – the ones done recently with the original scripts and period sound effects are also very good, so don't feel you have to stick with the vintage ones. Audiobooks read by Anthony Head are also available, but I like my Paul Temple as plays so never buy the readings.
Labels: 1930s 1940s 1950s 1960s heroes radio