We have finally given up trying to maintain our veg patch. The usual cycle would be enthusiasm in spring > early summer growth > ATTACK OF THE WEEDS > pretend we can’t see the veg patch for the rest of the year. And so we’re turning it into a space we’ll use.
We have a longish but narrow back garden. It faces south, so it gets full sun, and there’s a patio nearest the house. We’ve always had a table and chairs on the patio – various styles over the years – as we enjoy eating outside on warm evenings, or having a mojito in the sun on a Saturday summer afternoon. On the patio are plenty of flower-filled ceramic pots in terracotta or shiny cobalt blue, plus things like aubergines and blueberries because I like growing things I can eat, even if pound sterling spent for pound in weight consumed they’re hideously uneconomical. After that there’s a bit of lawn (and a rotary washing line, no dryer for us) with flower beds either side. Those have had a consistent colour scheme for years, fiery colours plus accents of blue.
While the patio and main garden are distinct areas – the patio is paved and the fence there is blue, the garden is grass and the fence there is green – I’ve tried to give them a sense of unity by carrying the colours of the flowers across. We could just have decided to do more of the same at the end, but Mr Robot fancied another little sitting area, somewhere to have his morning coffee, and I wanted to do something a little different. We’re going to turn the end of the garden into a green-and-white garden, larger plants and white flowers only, with a small pond. We were already using old bricks (from a wall between us and next door, demolished years before we bought the house but left behind the old shed) to edge the vegpatch, so some shuffling around has turned those into a terrace.
I’ve always tried to avoid making the main part of the garden look too flat and gaudy. I want colour, but not a garden like a municipal roundabout. Because of that there are already plenty of taller plants and perennials, like peonies, foxgloves and delphiniums. And I’ve tried to bring in appealing foliage to break things up, heucheras and hostas. So the new area will have more of the latter, plus similar perennials to the colourful garden but in white. Different colour, familiar shapes. A white peony’s already in place, though I'm not expecting it to flower till next year, and I’ll definitely introduce some white delphiniums. We want some bigger, more dramatic foliage plants too. Currently we’ve got a fatsia and a bamboo, both in pots because we don’t want to spend our lives pruning the former back and digging up the latter. (Bamboo is horribly invasive, keep it in a pot!) And the terracotta pots echo those on the patio.
We’ve got a couple of trellises which should help the ‘secret garden’ feeling along. I’ve wanted a kiwi fruit plant for a while. I’ve ordered two, one per trellis, so should have my own kiwis in a few years. I’ve also got some gardenias on their way. The glossy, dark green evergreen leaves will stop it all looking too bare in winter, and the flowers will smell utterly heavenly in summer. And that’s the beauty of this garden: white flowers show up better in moonlight, so this will be a night garden too. It’s a work in progress, obviously. It’s not going to look really good for a few years at least. But it’ll be better than the vegpatch in August!
On the subject of works in progress, since my last ilness – the stomach cramps – resulted in me losing a couple of pounds, mainly because I couldn't eat, I've decided to try calorie counting again. I hit 15 stone earlier this year, and my first goal is to get to under 14 by the time we go to a gig in Cardiff at the end of May. The calorie counting and the gym are starting to have an effect, and I think I'll hit that goal. (After that, my next target will be under 13 by the time of my wedding anniversary trip in September. My knees and cardiovascular system will be grateful!) I've found I'm reluctant to even try a lot of things in my wardrobe on, but hopefully once I've hit that first goal I'll be ready to see how they hang. I have at least been working on my tweed waistcoat. Hobbits are supposed to be portly! 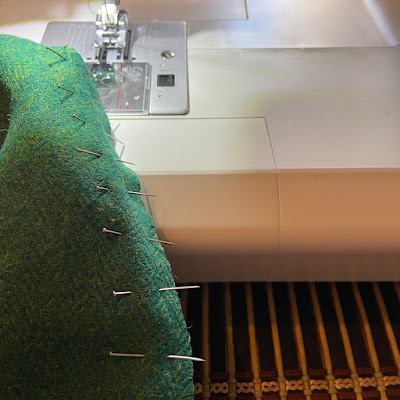 PSA: Sewing Bee starts tonight!
Anyway, here's to works in progress – we spend time on them because they're worth it!
Labels: gardening robot data sewing