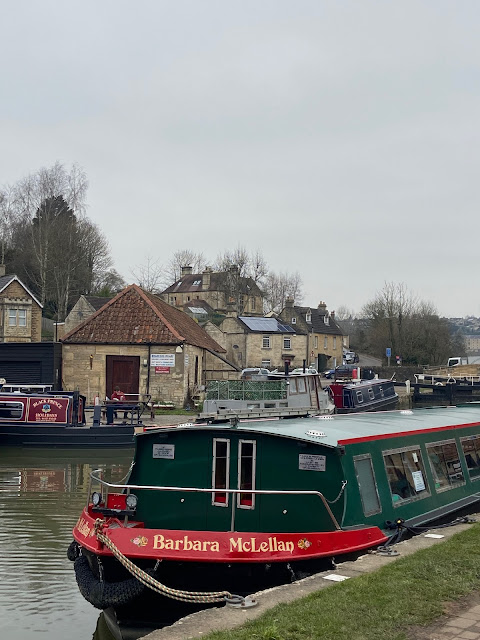 So, how are you feeling right now? I'm asking because 1: I like you and 2: I've got one foot back in the burnout zone, and I'm honestly not sure if it's an echo of 2020's burnout (which I thought I'd managed to get over last year), menopause, or just the second January running during a pandemic after nearly two years stuck mostly at home. Are we all feeling like this? At any rate, half the time my mood is DO NOT WANT. Unless what's on offer is sitting in front of the telly eating junk food, then okay, don't exactly want, but it's the option I'm prepared to take.

That's just one foot though. I've been trying to make the most of my more upbeat days, partly because fun is fun, and partly because it makes me less hard on myself when I have to have a day slumped in front of the infernal box. Mr Robot and I went for a walk to the next town, Bradford On Avon, which was nice. The canal path was a little dreary as none of the trees or flowers are doing anything right now and the sky was grey, but it was good to get out in the fresh air. Plus our pal Lisa lives in Bradford and met us in the pub there for a cider. The first friend I've seen in the flesh in months.

All that telly and takeaway has put back the weight I've lost but I've kept going to the gym. Only once a week for the past couple of weeks, but I haven't missed a week. I was due to take some progress photos over the weekend and wasn't in the mood, but did it anyway because I knew I'd be annoyed with myself in three months' time if I missed a session. And even though my weight's the same, my shoulders are way less rounded – hoorah, posture! – and my bottom is way more rounded, so that's a win in general. One of the things I've had to learn since 2020 is not to beat myself up about my weight. I'll eat heathily when I can, and go to the gym when I can, but on the days when I really can't, I need to accept that what I need to do is to be kind and gentle with myself, not get angry/sad and tell myself I'm lazy and lacking willpower. That just makes things worse. 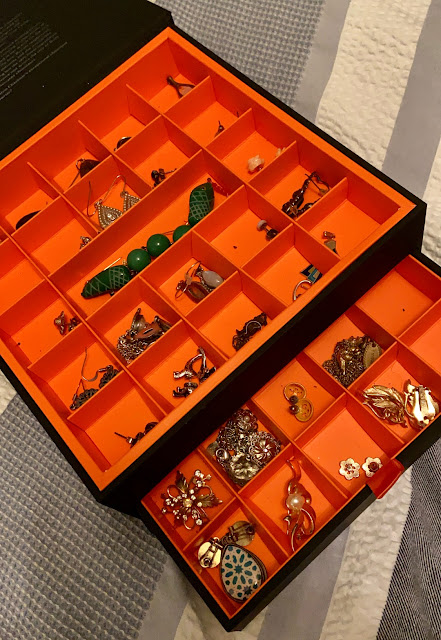 I've kept up with my aim of not rewearing a piece of jewellery this year too. Mr Robot gave me a box of very posh chocs for Christmas, so I've repurposed the good-quality box. Previously a lot of my regularly-worn costume jewellery was all together in the little pots of my glass dressing-table set, but now I can see all the different bits more easily, and I've put some less-worn pieces in the box too. At some point I'll cover the box to get rid of the chocolatier's logo on the top, and replace the cardboard cells with sturdier ones.

I've also half kept up with Cocktail Of The Week. Last week's was a Delmonico – brandy, red vermouth, bitters and a cherry. Not my favourite, to be honest. Brandy's not my thing, even with a proper Amarena cherry in.

And I did some sewing yesterday! For the first time this year. I'd done a full bust adjustment on the pattern for a waistcoat, so I made a toile. The bust point needs dropping by an inch and a half, and the waist taking in a little (consider me amazed). I'll do another toile to check it, but once the pattern's perfect I can make my waistcoat.

Anyway, February's looking better, and not only because the days will be getting longer. We're going to see The Stranglers. Leaving the house. Doing a thing. And then we've also got a couple of nights in London planned, and I've already got tickets for the 1960s boutique exhibition at the Fashion And Textile Museum. It's all going to be great!

Stay safe, and if you too have the January blues, remember spring's not too far off now.