Pippin almost never sits on me when I’m in bed - she usually likes to snuggle up against me - so I’m glad I was able to capture the moment. The mornings are pulling in now, and while I’m up when it’s light on days when I’m working from home, three days a week I have to go into the office. I have to say, after a year and a half working solely from home, getting up in time for the commute three days running feels like hard work!

Happily, next week I don’t have to go into work next week as it’s our 20th wedding anniversary. Long before the ’rona hit we’d planned to have a trip back to Seville, where we spent our honeymoon, taking in a night or two at the Parador in Carmona. We’ve decided to postpone that, and so we’re having a week in St Ives. I won’t lie, it’s nowhere near as exciting, but I am pleased to be getting away at all.

I have packed, but for once I won’t be wearing the same old things in my holiday photos. (Will you even recognise me?) Partly that’s down to the weather - in September I usually go somewhere warm enough to take summer clothes - and partly it’s because I’m still carrying my lockdown weight. So you’ll have something different to look out for!

Some things never change though… She’s still a fighter! 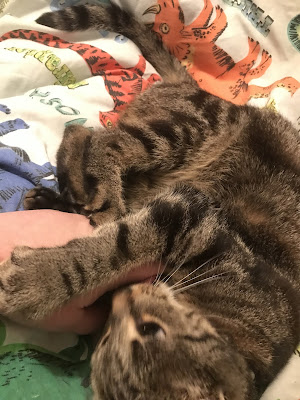