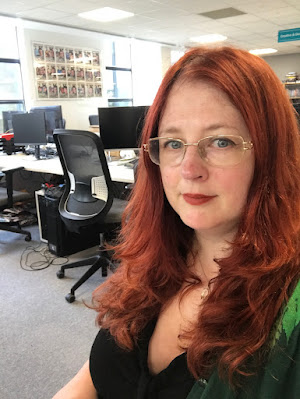 Hallooooo! Guess who's back in the office one day a week? Work is easing us back in gradually, and we don't have to go back in fulltime at all – from September I'll be in three days a week. I've done a fulltime job throughout the pandemic, of course. I've been lucky to keep my job; so many people lost theirs or were furloughed. I wasn't keen on the idea of going back at all, but I have to say I do think it's doing me good. It's nice to have a change of scenery, and I met my friend Andrea for lunch last week. I was really scared people would comment on my lockdown weight gain, but the few people who are in at the same time as me have been lovely.

I don't know if it's being back in the office or having had work done on the house but I definitely feel bouncier right now. Rather than let work overrun and then just watch brainless telly to wind down, I've been watching films, reading books, and even got my drawing pencils out again. I've only drawn one thing so far, but it's one more than I'd done in the first seven months of the year. I also realised I was procrastinating on finishing my pussybow blouse because I'd hit a point where I needed to learn a new technique, so I made myself get the sewing machine out and practise the technique on scraps. What I was learning was how to put a vent below a French seam. There are great tutorials online, and actually it's not hard. The blouse will be finished. 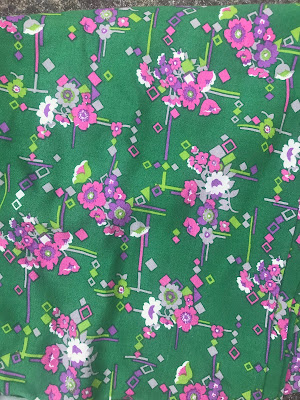 On which note – look at these brilliant fabrics I got via Instagram. The seller specialises in 40s stuff and I'd forgotten she had a sale on, but I guess most of her customers don't like the same era as me because she still had some later beauties when I remembered. I bought up the entire yardage of both of these. The green is thick, I think with a twill weave, though the surface is slightly rough like crepe. I suspect it might have been curtain fabric originally as the print is quite large (each flower cluster is roughly the size of my hand), but I'm thinking of turning a chunk of it into wide-legged trousers, and possibly making a shift dress too. 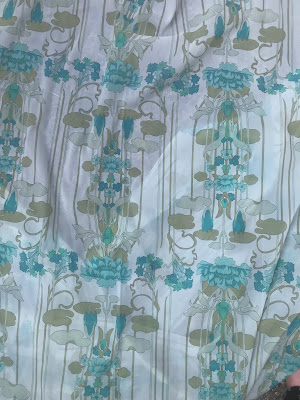 The art nouveau print is just gorgeous. It's hard to photograph well; the background colour is a really pale bluey-grey. As you can see from the photo, it's really fine, a sort of chiffon, but polyester so pretty sturdy and crisp. I do love the late 60s/early 70s nostalgic fashions that drew on the Edwardian era and 30s and influenced Biba, Ossie Clark and so on. I've been pinning various styles I like on a Pinterest board, and have found an Ossie I'm tempted to copy using this, though I'll line mine. The original was sheer, but I'm no young Ingrid Boulting! Rather than do a plain lining, though, I plan to get some dotted swiss fabric and edging and make a vaguely Edwardian full slip, in keeping with the feel of the pattern. I need to wear a bra, and if I make my own slip I can make straps thick enough to cover bra straps (with lingerie loops to hold them in place) while still keeping the whole thing light and dreamy, in that 70s nostalgia way.