A change of colour 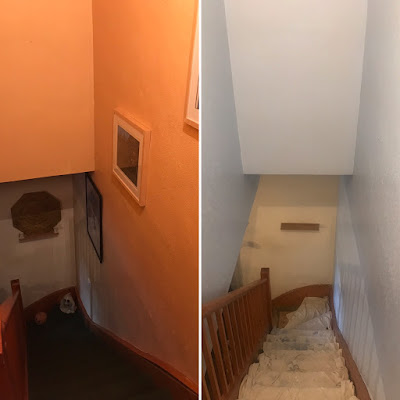 It's been a busy week in the House Of Robots. I mentioned in my last post that we'd asked Ian down the road to do some DIY. Because he does a lot of gardening and exterior work, we expected he'd be busy doing that for people and the decorating would wait till September. But no, he was able to fit us in, and this week repainted the stairwell for us. Mr Robot and I do our best, but were a bit uncertain about using ladders on the stairs. Ian knows what he's doing. He also stripped the rubbish picture rail and skirting boards from the upstairs landing, smoothed over where the curtain rail had been and replaced the skirting boards. The old ones were covered in blobby mushroom-greige paint. (It's only take us about 18 years to get rid of them!)

Ian's now moved on to the living room – the awful, uneven bare plaster where the fireplace was replaced is finally going, though we've only been living with that for five years.

You're probably reading all this in horror, thinking, 'How can they live with things they don't like for so long?', but we're not great at fixing a lot of stuff ourselves. Plus the things we like about our house outweigh the things we don't – we tend to look on the bright side when it comes to our home. 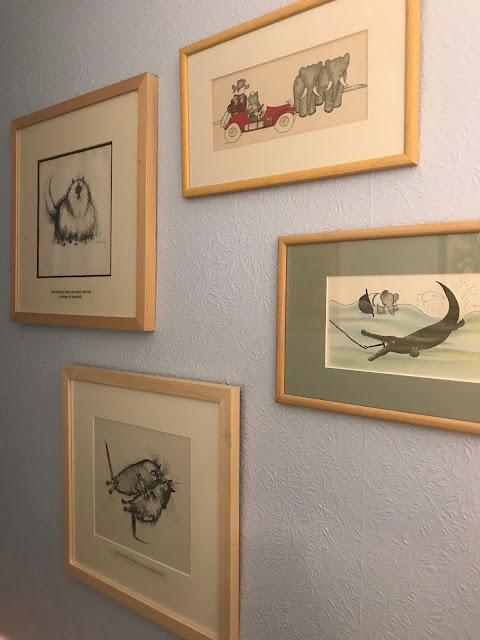 Anyway, Ian did the walls and ceiling, so we've been varnishing the new skirting boards and old pine doors upstairs a nice shade of oak brown. It looks so different, so much fresher and brighter. My animal gallery looks better against it too. I chose the peach colour that was there before, but it had started to feel oppressive. We did paint that ourselves, doing the upper parts of the walls with a roller on a stick – but that meant the ceiling had to be the same peach colour, adding to the claustrophobic feel. Ian used a ladder, so he was able to paint the ceiling white again. We're planning to strip back the bannisters ourselves and varnish all the woodwork down the stairs the same oak colour as we've used on the landing, though that's a job for Next Week Mim. 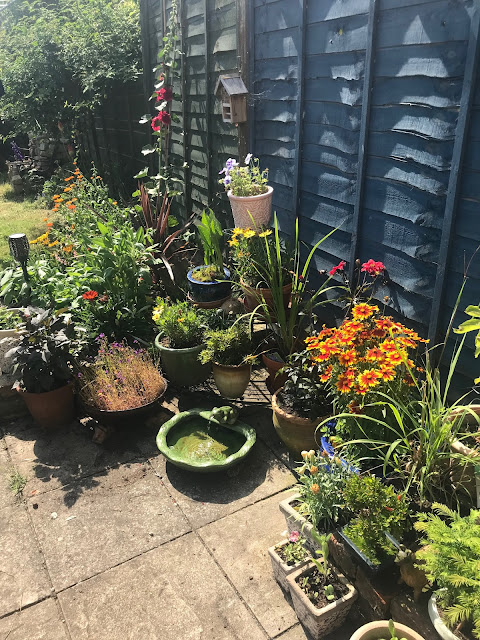 The garden is looking wonderful, though I'm indoors reading blogs at the moment because it's too hot out there right now. Barbecue later! I'm always so grateful for that outdoor space. We went to the pub last week for the last time in a while. When masks were being worn and there were social distancing rules in place I felt okay to go to places I knew were being careful, but with all restrictions being abandoned tomorrow I'm actually going to go out less, not more. My bosses want us back in the office one day a week in August, and I am really not looking forward to it. Partly it's because of the epidemic (if you're not in the UK, yesterday's figures here were around 55,000 cases for England and Wales) and partly it's because I've gained loads of weight and no longer know how to talk to people. Ho hum. If I manage not to catch a virus on the train, maybe going into the office will ease me back in to moving around more and relearning to socialise.