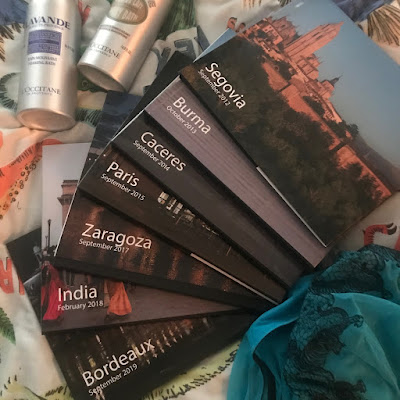 Another year older, and my first lockdown birthday.

Actually, I had a really good day. I'd been saying to Mr Robot for a while that I really wished we had photobooks of our travels, because hard copies just feel more durable than files on a computer. So he secretly spent weeks putting together a whole set of photobooks for me! Just flicking through them brings back so many memories: the feeling of sun on skin, the taste of amazing food, the scent of flowers or old dusty buildings...we've rather optimistically renewed our passports this week, but whether we'll be able to go away for our 20th wedding anniversary later this year is anyone's guess. At least I can travel via my books. 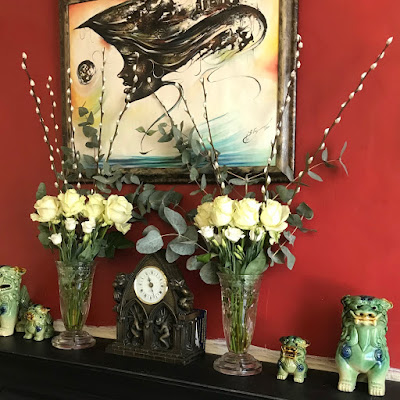 Later that day I got a flower delivery: he's set me up a two-month subscription with an ethical florist, and I'll be getting a bunch of flowers every fortnight. As I work from home in our living room, I'll get to enjoy these beauties for at least eight hours a day every day. This delivery was big, blowsy white roses and pussywillow. I cut the roses down so they weren't too tall for the Victorian vases on the mantlepiece - they originally belonged to my mother-in-law, and we suspect they belonged to his grandmother originally - but I left the pussywillows long and they look wonderfully dramatic. 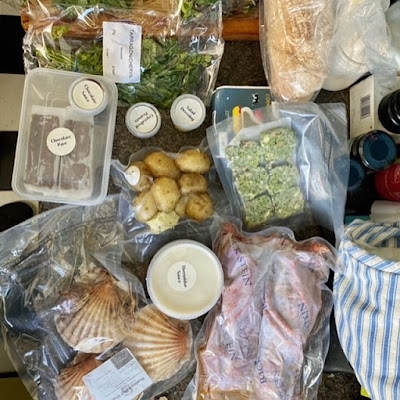 Usually we'd go out for dinner for a birthday. Last May, when it was Pete's birthday, our options were really limited. it was the first lockdown and I guess everyone assumed it would be the last, so we made a nice dinner at home and that was that. After many more months than any of us expected, lots of really good restaurants now do delivery services. I see the awful times friends in the hospitality industry are facing, and don't mind paying occasionally for something we wouldn't make ourselves knowing we're helping to keep people in work and businesses afloat. So my birthday dinner was from Rick Stein's restaurant! Everything got delivered in a big, chilled box with icepacks in, and was as prepared as it could be. The scallops had been opened, the lobster cooked, the potatoes sealed in a bag with butter ready to boil.

We had scallops with hazelnut butter to start with, then lobster thermidor, and finally a chocolate pave. We'd never cook lobster ourselves, so it was a real treat. The cats, of course, were milling around. They had a little bit of scallop each, because they are spoiled, and Ziggy decided to investigate the empty lobster shells. 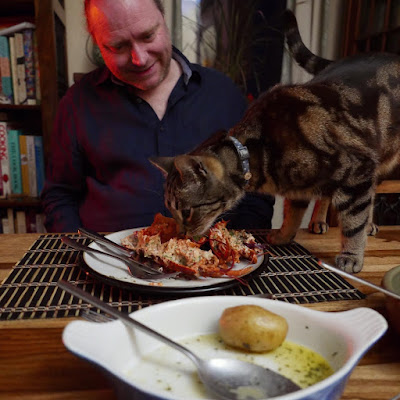 Hopefully by the time May rolls round again we will be able to go out for Pete's birthday. Looking at the government's 'roadmap' (it's a TIMETABLE FFS!) we should be able to eat outdoors, and if he's happy to wait an extra month we might be able to go to an actual restaurant again. But as lockdown birthdays go, I reckon this one was a pretty good one...