Footsteps in the Fog [film] 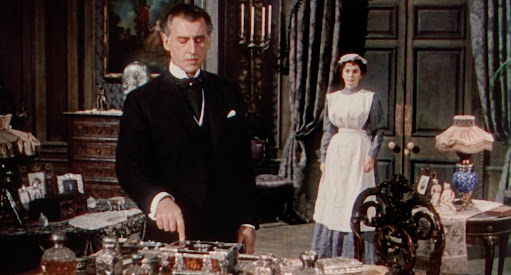 Here's something I haven't done in a while – a film review. Every so often the channels available to us get shuffled round on cable, and we got Sony Movies Classic not long ago. It's actually pretty good if you like old films, as it shows ones that aren't just the usualfare. I thought I'd give some a go, starting with this British melodrama, which stars husband and wife Stewart Granger and Jean Simmons.

The film opens with a death: Victorian 'gent' – I'll have to use the term loosely – Stephen Lowry poisoned his wealthy wife, planning to live the life of riley. Unfortunately for him, his housemaid Lily cottoned on to what he did, and blackmails him into making her housekeeper and firing the other staff. She helps herself to his wife's things while she's at it – she's determined to be the only woman in Lowry's life from this point on.

Lowry's not happy: he's got the cash, he's got a pretty, posh blonde, Elizabeth Travers, lined up to become The Second Mrs Lowry, and Lily's getting in the way. But what's one more murder, eh? Unfortunately he's not as good at crude violence as he is at poisoning, and in the thick London fog manages to kill another woman entirely. 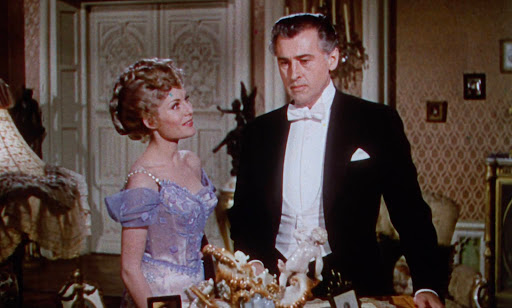 There's a wonderful tension as Lowry tries to break free of Lily, only managing to work himself deeper into her power when the police accuse him (rightly) of the woman's murder. I won't spoil the ending for you. But I will say I really enjoyed this film, when I'd anticipated being possibly a little bit bored. Granger's suitably creepy as Lowry, to the point where I wasn't entirely sure what lovestruck Lily wanted him for, and Simmons looks fragile, but her obsession gives her a sinister inner strength. They're very well balanced, in a twisted way, and that maintains the suspense. It keeps you hanging on to see who, if anyone, gets their just desserts. 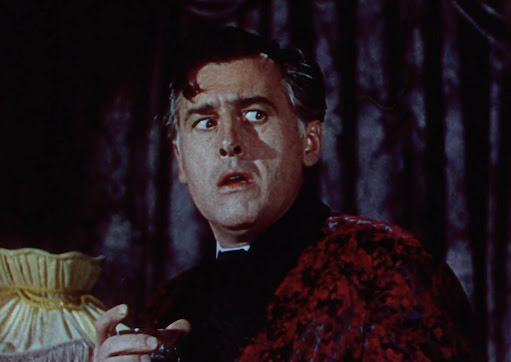 A word on sets: the art director was Wilfred Shingleton, who won an Academy Award for the sets for David Lean's Great Expectations. Possibly of more interest to me is that he was also art director on The Pure Hell of St Trinians, and production designer on half-a-dozen episodes of The Avengers. That's a respectable track record. The sets in Footsteps in the Fog are ornate, as befits the Victorian period, but very dingy in the Lowry house, everything sumptuous, yet heavy and gloomy. The Travers house, in contrast, is also ornate, but brighter, lighter, like a bowl of sugared almonds. You can tell just by looking at them that a lot of the objects are the real thing, genuine Victorian furniture, and it really adds to the ambience.

If you're after something chilling to watch one afternoon, this is pleasantly creepy.
Labels: 1950s crime film Victoriana