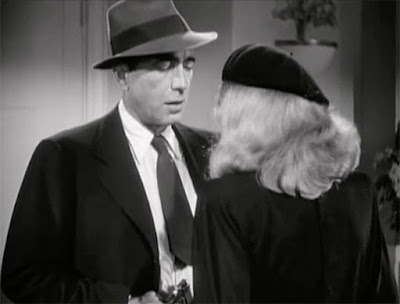 Humphrey Bogart. Lizabeth Scott. 1947 film noir. How could anyone resist that?


Dead Reckoning has all the classic film noir elements you could imagine, from the world-weary voiceover to the husky-sounding femme fatale and tough guy mobsters. You know from the start that Bogart’s character, Captain Murdock, is going to be a good guy – this is the immediate post-war period and he’s looking for a young hero from his unit who’s gone missing rather than have a photo of hims receiving the Congressional Medal of Honor appear in the paper. That sort of character, at this point in history, can’t be anything less than decent, especially when played by Bogie just a few years after Casablanca. 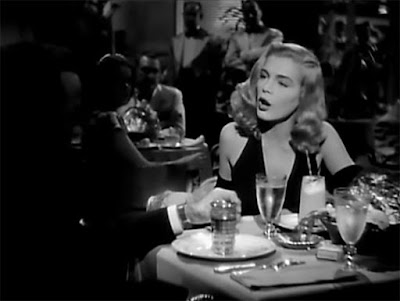 So, Bogie cherche’s l’homme, but as we all know, the golden rule (charcoal role?) of noir is cherchez la femme. The young soldier was led astray by a woman before joining the army, so it's natural for Murdock to look her up.

Enter Lizabeth Scott as Coral Chandler, all side-parted waved hair and slinky dresses. When she first came on screen Mr Robot compared her, unfavourably to Lauren Bacall, but then it’s fair to say he’d compare most people unfavourably to Bacall. I liked Scott. You can certainly imagine a young man going crazy for her… Murdock’s old enough to know better, but that doesn’t stop him throwing himself headfirst at Coral as well as into the investigation.

I shall leave my discussion of the plot there; you may want to watch this for yourself. I’d certainly recommend it for lovers of films noir, Bogart or the 1940s. It's certainly put me in the mood to watch a few more noirs.
Labels: 1940s crime film noir