It's the festive season! 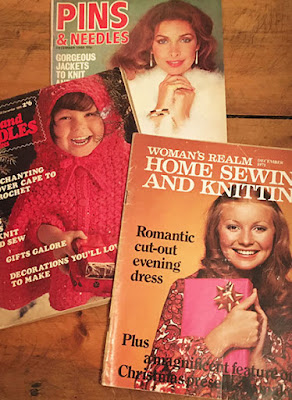 So, have you got your tree up, if that's the sort of thing you do? We haven't; I grew up not putting it up till a fortnight before Christmas, so I don't like putting ours up too soon. Also, the cats like climbing around in it and stealing baubles which rapidly becomes annoying. I am starting to feel seasonal though. Because of my December deadline hell, I start shopping in November, so it's all nearly done now. And I've been looking at some more recent vintage craft magazines.

Does that make sense? The 1920s ones to a lot of the 60s are out permanently, but the later 60s and onwards aren't really 'my' time so those ones are in a crate, and the crate was wedged under the bed until recently. We replaced the bed, the crate got shifted to the spare room, and now I've been picking through them. And as it's a month to be generous, I thought I'd share outfits from a couple of December issues with you. Don't say I never give you anything.


Old craft magazines are interesting because they're aimed at a very different demographic to high fashion ones, and as the 60s roll on and women start to get more disposable income and clothing becomes more affordable, more women were buying ready to wear and, dare I say it, the clothes in craft magazines become more suited to older, less fashionable women. Anyway, exhibit A, from 1969. This sort of silhouette was kicking around for most of the decade and I really like the cut and colour (and the brooch, of course), but it would've been starting to look dated by 1969, when at the fashionable end of the market you had the likes of Zandra Rhodes, Ossie Clark and Biba making more flowing garments. One for the mums, not the daughters. 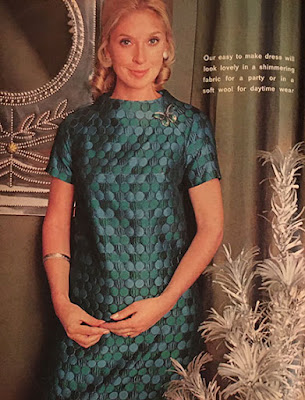 What a difference two years makes! This one's from 1971, and is a completely different festive look. Less stiff, more in keeping with the freer-flowing styles that had been fashionable for a few years. This was something I hadn't seen before that the Woman's Realm Home Sewing And Knitting magazines did: precut fabrics. You chose the colours and size, and they sent you the ready-cut pieces to stitch yourself. While I can see how that speeds the process up, half the joy of home sewing for me is being able to tailor things to fit. With precut pieces you don't get to do that. At least the pattern puts the FAB in fabric. I could picture Ann in a knee-length version! Hell, I'd wear a maxi like this, though Mr Robot would no doubt roll his eyes. 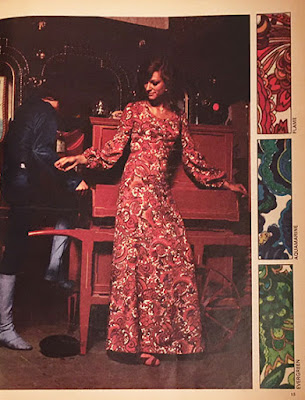 Back to 1969, and I'm guessing this was an attempt to get more in tune with the hippie vibe of that time. Compare those soft, full sleeves and gentle velvet to the stiffness of the blue/green dress above. 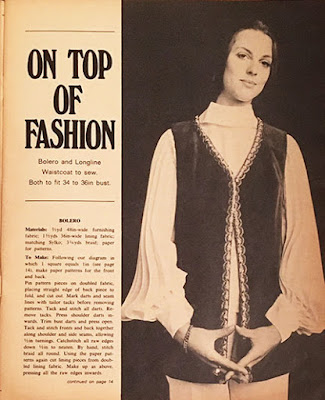 If there's one thing that can definitely stay in the late 60s/early 70s, it's the tunic-and-flares suit. Now I know there will be someone out there who can pull one of these off, who can make it look fantastic, but they're a rare bird. (Probably Goody. She's usually the person who makes me eat my words about 70s styles.) I'm not even sure it's that practical – unless you really want the whole world to get a good idea of the exact colour and outline of your underwear.

Oh, for the love of bob, NO. At least the crocheted pantsuit has a certain space-hippie appeal. But these straight-legged, long-sleeved, double-knit tunic suits don't even have that. What can I say? They're probably hardwearing. I'm not sure that's a virtue. Given how indestructible synthetics of this period were, there are probably loads of these lurking in landfill somewhere. 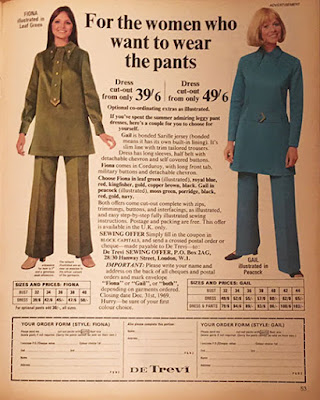 There were some beautiful clothes made in this period - I mentioned Ossie Clark and Biba - but clearly that sort of style hadn't filtered down to home sewists. It's always fascinating how our ideas of a time differ from how things really were for ordinary people, as the high fashion, the movies and music videos, are what gets left to history. I'm seeing that in my own lifetime as younger people embrace their idea of 90s style, which is not at all how I remember it! And one thing I will take away from my magazines is this: if I ever do get that time machine, there's no way I'm setting it for 1969.

So... would you dare to try the synthetic pantsuit?
Labels: 1960s 1970s aargh craft magazines