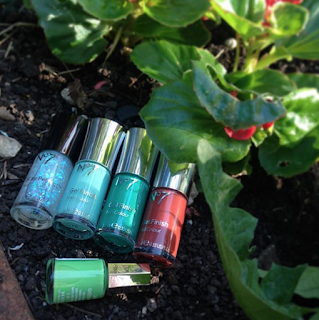 A few weeks back I bought some sandals because my feet swell up abominably in the heat. Then, because no-one's immune from peer pressure/the influence of the internet, I thought I'd better paint my toenails because everyone seems to think sandals with unpainted toenails are icky. Since then, they've mostly been pale blue with a blue metallic topcoat. The sandals are... need I say it, the colour that goes with everything I wear, because everything I wear is that colour... and the pale blue pairs up nicely.

But I fancied a change. I haven't worn nearly enough green this summer. For some reason Superdrug in Bath was out of pretty much every interesting colour of nailie, but I had some points on my Boots card from when I used to shop there (I switched to Superdrug because Boots moved their HQ out of the UK to pay less tax here), so I decided to finish off those points and treat myself. Turns out there aren't that many cool green shades available, in any range. Boots No.7 seemed to have the best colour selection, and they were on buy one, get one free, so I got a mint green and a darker jade green (because I couldn't choose between them), a pretty icy glitter topcoat simply because it looked so nice, and a gingery-red shade that I know I'll use loads in the autumn. Red-brown looks better on me than pure red, and I already have a few lipsticks in similar colours.

The mint and jade weren't exactly what I wanted, but they were as close as I thought I'd get. Neither were in-your-face GREEN enough. I reckon the mint will suit me best, but I want to believe the jade will look nice on me so I got it too. Trying to decide between the thing you really want and the thing you know will look best is hard... And then I popped into a little indie chemist for painkillers yesterday – finally booked a doc's appointment to get my shoulders sorted, because they hurt – and next to the till was a basket with bottles of the perfect apple-green colour in. WIN.

Nails aren't the only thing in my life that get painted green - the fences behind the flowerbeds do too, to make my narrow garden look wider. Here are the urchins eavesdropping on a cat fight a few houses down...