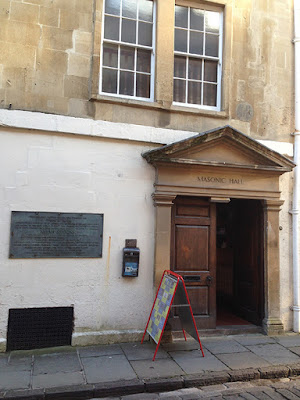 Last Friday Mr Robot and I went to an event being run as part of the Bath Festival. The Bath International Music Festival began in 1948, and the city has various other ones throughout the year - Literature, Children's Literature, Film, Jane Austen - but the music one has been rolled in with the literature one to create one mammoth multi-arts festival. The event we attended was a Living Literature one on Frankenstein. Mary Shelley polished the draft for Frankenstein in the city, and the book's 200th anniversary of publication is this year, so it was a good fit.

The venue was the city's original theatre. It became a Roman Catholic church, and has been a Masonic Hall since the mid-1800s (presumably around the time the Catholics got a proper swanky church with an impressive spire built nearby). I'd always wanted to see inside. And what I was hoping for from an 'immersive' literature event was something akin to Secret Cinema.

Er, what do I say? The event and I were not a good fit.

I think I'd expected more to see, do and touch. The lovely people from 4160 Tuesdays were there with a perfume recreated from a Georgian recipe. It's got lots of rose and geranium in, and is jolly pleasant. (Mr Robot bought me a bottle.) We got given a free cocktail when we got in, though I'm pretty sure that wasn't an authentic recipe. (I say free; the tickets were £40 a head so this wasn't a cheap event.) There were readings from a play about Shelley's life and writing, and several academic talks.

The highlight for me was Sir Christopher Frayling's* talk. I've been a massive fan of his work for years; he's incredibly scholarly yet always managed to convey a sense of fun in what he does, and can cover everything from popular culture to the highest of highbrow arts with the same engaging tone. Professor Nick Groom also spoke entertainingly; he's a gothic specialist and really knows his stuff. I can't remember the name of the person who gave the talk on vampires and Frankenstein, but that's for the best as it was awful. Really poor. 'Worst paper at a postgraduate conference'-level poor. I appreciate I'm possibly not typical of the audience for this event - I'm not an academic, but I have been a specialist SF/horror/fantasy book reviewer for 20 years, and know my stuff - but in addition to being shallow it wasn't delivered with any verve or confidence.

Now to the thing that really annoyed me. The write up for the event promised 'You'll be encouraged to walk among tableaux, readings, recreations and musical performances,' and they didn't really deliver on that. What they did have was biometric testing in a side room - but there was no organised queuing system for it, or even decent instructions on where to queue, so in the first interval we spent 10 minutes in a queue only to be told we were all queueing in the wrong place, then the next time I went to the new place only to be told we were supposed to be in the first place. I got quite annoyed and went to queue at the doors of the room because it was as likely to be the right place as anywhere else - at least we could see the equipment - and, frankly, we might as well have been invisible. No, "We'll be with you in five minutes," (to be honest, I'd have waited 20), no "Can you come back at the next interval." At this point I said in a rather loud voice to Mr Robot, "I've had enough of this badly-organised f***ing bollocks!" and stamped out. (Don't give me cocktails then expect me to sit through a godawful talk on vampires; my patience wears thin.)

Anyway, as I said, I'm probably the wrong audience for this event. It's probably a whole lot of fun for people who know nothing about the book. The venue was beautiful. The volunteers doing the chair-wrangling and so on were friendly and welcoming. I wish it had been billed more as a series of academic talks interspersed with fragments from a play, because that would have been honest. Immersive it wasn't. Like the creature, the aim was to merge parts into a beautiful whole, but the result was a monster.

*When he got his knighthood, he chose a motto that boils down to 'Go ahead, punk, make my day.' How can you not appreciate that?
Labels: Bath events Georgian horror