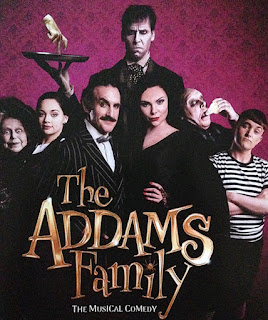 Last night Mr Robot took me to see The Addams Family at the Theatre Royal in Bath. I'm a big Addams Family fan, so even though the musical has had mixed reviews, I was keen to see it for myself.

This review isn't going to be any less mixed than the professional ones, I'm afraid. The sets were great, the chorus - beautifully costumes Addams ghosts - were extremely good, and (I never thought I'd say this) Les Dennis was superb as Uncle Fester. Samantha Womack was a reasonable Morticia; she's got the look, but her singing and stage presence weren't as strong as those of some of the other actors. Carrie Hope Fletcher as Wednesday, and Alice Page as Hope Beineke, in particular, could really belt out a song. Womack was great doing Morticia's big song, 'Just Around The Corner', but not so good at the others, and her tango with Gomez lacked fire. Likewise I wasn't convinced with Cameron Blakely as Gomez; with his fake Spanish accent he reminded me more of Manuel from Fawlty Towers! But his scenes with Wednesday were really nicely done, and you could actually believe he was a concerned father (Dale Rapley as Mal Beineke didn't convince at all).

Overall, my main problem wasn't with the cast, it was with the script. (Is that what they call the 'book' in musical theatre? I'm not a musicals fan.) In case you're still wondering who on earth those Beineke people are, the storyline is that teenaged Wednesday wants to get engaged to a nice young man, and he's bringing his parents to meet the Addamses. Gomez is sworn to secrecy about the engagement, which enrages Morticia when she finds out he's been keeping secrets, and none of the family ghosts can go back in the crypt till everything's resolved. I'm not a fan of 'older Wednesday' storylines anyhow - that always strikes me as a spinoff from Christina Ricci's superb performance in the film Addams Family Values. And the 'normal' family isn't normal; they're like older versions of Bran and Janet in the Rocky Horror Show, if their car had never broken down and they'd carried on with their dull 1950s lives. You could say that links back to the regular 'fish out of water' storylines in the original TV series, but the normal people in that were normal for the time, that was the point. You can't have a storyline about the tension between normal and not-normal when nobody's normal.

I wish there had been more punchlines from the original Charles Addams drawings from the New Yorker, and more visual humour. More Thing. More casual violence or mayhem.

I didn't hate this show - I'd warmed to it more by the end - but I reckon there's still scope for a decent Addams Family stage production.
Labels: Bath events horror icons