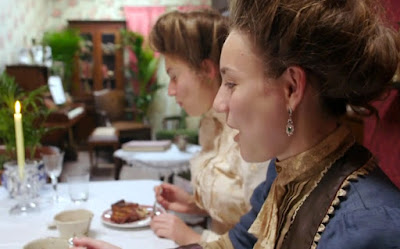 The Robshaws are already two decades into their tasty time travels, eating their way through British food history decade by decade, and I've really been enjoying the series so far. (If you're in the UK and you've missed it, you can catch up on BBC iPlayer.) They're living a middle-class lifestyle, which makes sense in many ways, as poorer people probably wouldn't have experienced as much variety or been able take advantage of trends in cookery. However, as people of that class would have had at least one maid, they've got one too – and what a trooper Debbie is. She prepared calf's head for one meal, and plucked pigeons for another.

The 1900s was a very meaty decade, it seems. Chops for breakfast, anyone? Kidneys? The family seemed astonished at the amount of meat on the menu. One thing that came up in the 1910s was how the suffragettes had close ties to the vegetarian movement, and I can't blame the female Robshaws for being delighted at their veggie suffragette lunch in 1911, especially after the previous decade's supper of brains in scrambled eggs. That'd put me off meaty things for a fair time.
The number of courses to each meal was far more than we're used to nowadays. I half-expected it; my copy of Quaglino's cookbook from the 1930s features three-course lunch menus and five-course dinner ones, but it's still got to be an awful lot to live with. Even the picnic the family went on involved cooked meats and elaborate salads. Debbie was turning all this out pretty much singlehandedly, first on a solid-fuel stove and then, for the 1910s, a very early gas cooker. Needless to say, she doesn't have anything like a fridge, and most kitchen gadgets are pretty basic.
Over the 1910s food got more expensive, and menus much more limited. One of the reasons for this was the First World War. I hadn't realised just how much tinned food Britain imported in the first couple of decades of the 20th century, and war knocked that on the head. Debbie was dispatched to the grocer's with a massive dustbin to stock up on provisions, though the authorities really frowned on that. After slaving away day-in, day out, Debbie quite sensibly went off to join the Women's Land Army in the mid-1910s and left the Robshaws to fend for themselves, which meant Rochelle was left with all the cooking, though Brandon and Fred did build a hay box, the 1910s equivalent of a slow cooker.
I feel slightly sorry for Rochelle as her daughters should have been helping, by the standards of the day, but she really is inept in the kitchen and it's pretty funny too. (Yes, she has to use a tin opener at one point. Oh, Rochelle.)
Next episode is the 1920s, and what does that mean? Cocktails, I hope. And we can all drool over the transformation of their home, and whatever lovely crockery they end up with. I suspect we'll all be having severe homewares envy over the next fortnight.
Labels: 1900s 1910s food television