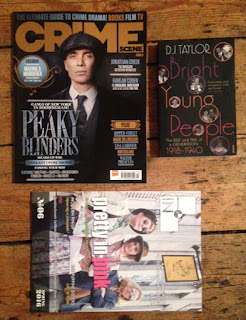 Gosh, it's a bit quiet round here, isn't it? That makes sense, really. In general, my life is pretty quiet. I'm still happily knitting away on my It Cannot Fail To Please, and enjoying reading Bright Young People. That's a history book all about the fashionable young set who were notorious in the 1920s. I haven't got very far into it, but already I suspect that while it might have been tremendous fun to be a Bright Young Person, they would have been deeply irritating to have around.


On the magazine front, I've new issues of both In Retrospect and Crime Scene to enjoy. (Disclaimer: I sometimes write for the former, and have a couple of reviews in the current issue of the latter.) There are some great features in both; I particularly enjoyed the articles on the Just William books and photographer Richard Avedon in In Retrospect, and Crime Scene has good articles on the forthcoming series of both Ripper Street and Peaky Blinders. Apparently the next series of Peaky Blinders starts with Tommy's wedding, though teasingly they don't say to whom!

I had last Thursday lunchtime to myself – usually I met Mr Robot for a cuppa at lunchtime, but some blanker had arranged for him to have a meeting – so I dropped into the Dorothy House hospice's vintage charity shop on Bridge Street in Bath. It's a really good location, just before Pultney Bridge. I've always worried that the big vintage chazzas leach stock away from smaller towns so it can be deposited in large cities, and I have definitely seen less decent vintage available in my local Dorothy House shop since the big Bath one opened. However, wherever the local vintage donations are going, they're not ending up in that place. The stock was, to be kind, disappointing. Very little of it felt exciting, and some of it definitely wasn't vintage. I know they're dependent on donations for stock, and are only a small regional charity, but I've found decent stuff in the smaller non-vintage branches. Ah well. I'll keep haunting my local regular branch and ignore the 'vintage' one.

My annual flail about my holiday wardrobe has begun. I need to take time to try all my summer clothes on. I'm pretty sure a fair few things I own, which were tight last year, simply won't fit right now. Erk. I'm also trying to wear more separates, which has led to the horrid realisation that I have no idea how to make an outfit that isn't based around a dress. With a dress, you just have to find accessories. With separates, you need the bits to match before adding accessories, and the textures as well as the colours need to complement each other too. I don't know how other people do it; I was looking in Seasalt and couldn't work out if the skirt I liked (this one) would go with either of the two plain green blouses I already own. I thought, “Well, if I buy the matching top and style my outfit exactly the way they've styled it...” to which a voice in the back of my head added, “...You might as well have bought a dress and saved yourself the extra cost of a garment.”

Now I'm going to digress about matching. At what point do you buy something that doesn't match anything else? I've got a vague shortlist of holiday clothing drawn up, and it's 70% navy, because when you're travelling you need every garment to be able to work with several others. My linen holiday trousers are navy. So most of the tops I'm considering to go with it are white or contain a bit of navy. And I thought I'd pack my navy cardigan, so the dresses that are mainly navy are a logical match. Voila, my holiday packing looks like an expanded version of my high school uniform.

Goody, you need to run outfit-composing classes. Or I need to give in and accept that I belong in dresses.
Labels: robot data