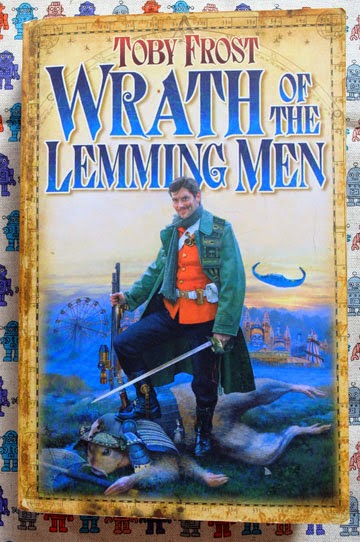 Wrath of the Lemming Men is the third of Toby Frost’s Space Captain Smith books. (The first two are Space Captain Smith and God-Emperor of Didcot, which I have also reviewed.) The books simply keep getting better, and this is the best so far – I’ve yet to read A Game of Battleships, the fourth in the series.


In Wrath of the Lemming Men, hapless Space Captain Isambard Smith, renegade sexbot-tuned-pilot Polly Carveth and ultraviolent alien Suruk the Slayer are still working for the British Space Empire’s secret service. The characters are more developed and more real, less slapstick: Smith is less of a bumbler and Carveth doesn’t use quite so many double entendres, but they’re still the trio you’ll have come to love if you’ve read the first two books.

The furry, lemming-like Yull were introduced at the end of God-Emperor of Didcot, but come to the fore more in this book as they become formal allies of the insectile Ghast. I found them really entertaining because, well, they’re giant lemmings. And bloodthirsty. The Ghast and Yull are searching for the ghostly, powerful Vorl, while Ghast commander 462 and Colonel Mimco Vock of the Yull are specifically seeking Smith and Suruk respectively, hoping for revenge. Smith and co. are also searching for the Vorl, to try to form an alliance with them before the Ghast get to them. The quest takes all of them to such exotic destinations as battle-torn New Luton and Lloydland, a deserted theme park, though the first scene is set in Tambridge, where Archers fans might recognise the names of some of the casualties.

I did wonder at points how international the humour might be, but there’s enough of it that people who don’t get the reference to things like Will’o the Wisp (the cartoon) or 'A Mouse Lived in a Windmill in Old Amsterdam' will still have other jokes to enjoy, including a number of Star Wars-based ones, and a Doctor Who reference. On top of that, Frost’s given the Yull a vaguely Aztec religion, and the way a stepped temple is described as being decorated with images of the war god Popacapinyo killing the thief god Picapocetortu did make me laugh lots.

In short, another fine outing for the tea-drinking crew of the John Pym!