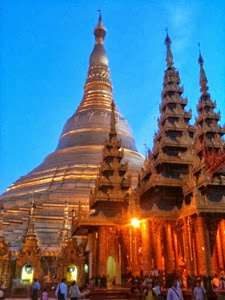 Apologies if this post looks a bit funny: the reason I've been quiet for a week or so is that I'm in Myanmar (Burma). My grandfather was born here, and never got to come back before he died. I promised myself that one day I would come here for him, and now here we are!
We've spent a few days in Yangon, where we took time to visit the War cemetary. My great-uncle Bunny died in 1942 and doesn't have a grave, but his name is on the memorial. I will do a proper post on the cemetary later, when I have access to Mr Robot's proper photos. It's phone pics for this post, I'm afraid! We also visited Shwe Dagon Pagoda, the stunning building in the first photo. Then we went on to Inle Lake, which was utterly amazing.
Anyway, now we are in the town of Pyin Oo Lwin, which was a hillstation called Maymyo when granddad lived here. We had a fantastic guide, Sozo, who has helped other people looking for places where their families lived. I fear he has more success with white people as their houses were bigger and the names of the buildings stuck. 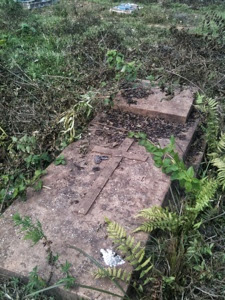 First we looked round the Christian cemetary. My great-grandfather is buried there. Sozo is friends with Father Joseph, the local Anglican priest (he is a Burmese gentleman), and also maintains the cemetary, though it is hard work. Father Joseph has been having the site cleared and is trying to re-identify graves, but as great-granddad McDonald had a ling-gone wooden marker we found the approximate area where his grave was, but not the specific site. It was very kind of Father Joseph to take time out from his church work to show us the cemetary in detail as I am sure he is a busy man!
Then we looked for the house where granddad grew up. My great-aunt gave us directions, and we found the approximate location, but again, not the house itself. From the directions, we are sure that the house stood on a site that is now a playing field. However, we did find a house that looked just like granddad's would have done in the 1910s, with a brick ground floor and wooden upper floor with verandah. It's one of the oldest houses in that part of town, around 100 years old. Sozo spoke to the chap who lives there, and he allowed us to step into the yard to take photos. 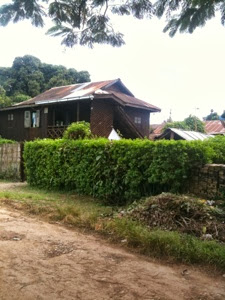 It isn't the grand sort of colonial house you see in most photos of hill stations. I'm quite glad about that. The history of Anglo-Indian and Anglo-Burmese people, the mixed people, sometimes seems in danger of being lost. This little house is part of that other history, the story of people who weren't grand or authoritative. My people. I feel I've brought a little piece of granddad back to the town he loved.
Labels: 1910s Burma/Myanmar travel