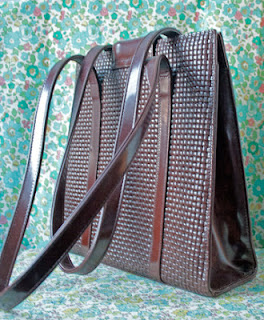 Who says you can't find a bargain in a charity shop any more? Whichever deity looks after cheapskates was definitely looking out for me on Saturday as I found this beauty in one of my local chazzas.

I like boxy bags, and I don't spot them very often. While the boxy look is something you tend to see in older bags, modern ones being slouchier and sloppier, I could tell this was actually pretty modern as it has a magnetic clasp rather than the snap clasp older ones have. I prefer the snap clasps, liking the sound they make, and very nearly put it back on the shelf, but it was leather, only £6 and my only other brown bag is a warm brown leather-made-to-look-like-croc one, so a chocolate coloured one could well come in handy. I didn't recognise the label, but that didn't matter – I liked it, and so I bought the bag.

It's made by Dents. (The lining has 'Dents' woven into it and there's a metal label inside.) The cheapest leather bag on Dents' website costs £70. I nearly fell over when I looked the company up later on!

A lot of my friends have asked me how I find bargains, but as you're interested in Old Tat, you probably already know the answer to that: persistence. Mr Robot and I always go to the butcher on a Saturday, stop at our favourite café for a cup of tea, and often have a quick bash round the charity shops. We've been doing that for a few years, and I reckon I go round the charity shops at least two Saturdays a month. In all those visits, this is the second bag I've found and wanted. You have to keep going back.