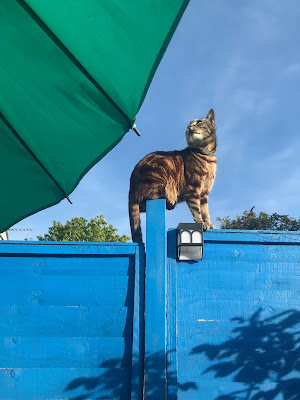 I didn't mean to disappear for that long. You know how it is – sometimes you're Not Blogging and sometimes you're just doing other stuff, and I've been doing other stuff. Aside from work, it's mostly been gardening and domestic stuff. I've had that usual spring urge to improve my home a bit, and currently Casa Robot is at the point where I wouldn't be completely ashamed to let a stranger in. 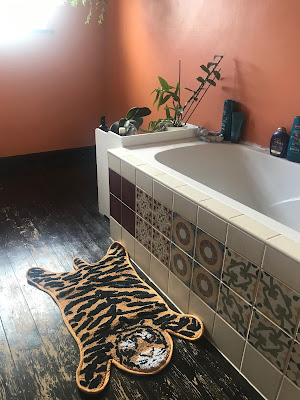 Oh, on the subject of home, I bought a bathmat that looks like a tiger. What can I say, it makes me laugh! Especially that stubby little tail.

So, what's been going on? Mr Robot's birthday was at the start of May. He took the whole week before it off, but I could only snatch a couple of days. Deadlines. Still, as I had to go into Bath to see the dentist on one of those days (a check-up, all good) he came too, and we took the chance to spend some book tokens we were given but hadn't been able to spend. I still read paper books but he's all-Kindle nowadays as he likes to fall asleep reading but doesn't like to fall asleep wearing his glasses, so he just ramps up the text size on his Kindle. Because of that, we bought cookbooks, one French and one Moroccan.

And then we had our first food out in months and months. It was Spanish small plates at Pintxo, and the wind was really rather chilly out, but it was food we didn't cook ourselves. Heavenly. Then we popped over to The Grapes and had a beer in their outdoor seating area. Our first pub beer since last September. Lovely. People are really good at social distancing down here in the southwest (locals, anyhow – tourist areas seem more problematic) and I hope things continue to improve.

The French cookbook came out for His Nibs' birthday. Terrine for starter, steak and frites for the main, then tarte tatin for pud. I wasn't convinced I could do the tatin, and it was perhaps a little anaemic – I should've cooked the caramel for longer – but it all tasted great. 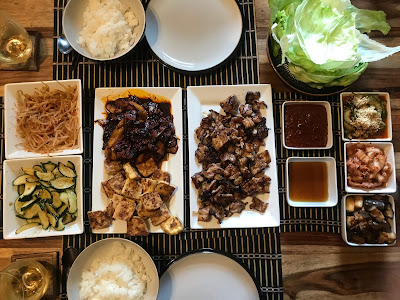 One of the gifts I gave him was a Korean cookbook he'd been on about, plus a batch of ingredients, so last weekend Mr Robot made a Korean feast. I've never had any food that tastes quite like Korean. It's very rich in umami, but also fiery with chillies, and often sweet as well. The little vegetable side-dishes, served at room temperature, are an important part of the meal. There's always an odd number, and the more there are, the posher the meal. If you know anyone who won't eat their veggies, Korean food ought to persuade them.

That's about all we've been up to, really. It's been a good time, just not very remarkable! I hope you've been having a good time too.