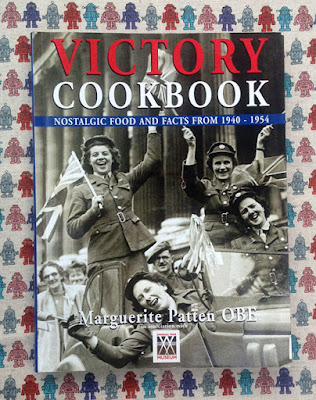 Like most of my local charity shops, my nearest Oxfam bookshop no longer seems to get in the volume of vintage books that it used to. However, it does sometimes get interesting books about history, and this cookbook caught my eye the other day. I own a copy of Constance Spry's Come Into The Garden, Cook, which was written during the Second World War, but this one was written by Marguerite Patten, a Home Economist for the Ministry of Food during the war, from a modern perspective, and I was hoping for a more... shall we say palatable selection of recipes.

The book is actually three retrospective books squashed into one. First there's We'll Eat Again (1985), which is divided into the sort of chapters you'd expect, like Soups, Main Meals, Vegetable Dishes and Baking. Then comes The Victory Cookbook (1995), which is divided mainly into chapters of celebration food, like 'Street Parties', 'Voluntary Services Celebrations', and 'The Forces' Victory'. Finally, there's Post-War Kitchen (1998), which covers the post-war rationing period - rationing didn't end in Britain till 1954.

The three-part structure and complete lack of index do mean the book's not especially useful as a cookbook. You'd have to flick through the whole thing to find all the baking recipes, for example, which is probably more faffing about than most of us would want to do. 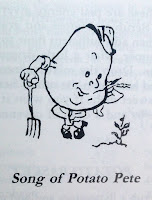 Of course, you do have to ask yourself how many people would actually want a book purely of wartime recipes; it wasn't noted as a period of great culinary creation, after all. This is as much a book to read and learn from as it is one to cook from, a book to flick through, enjoying the cartoons promoting various foods and anecdotes of how people were encouraged to eat more veg and waste less bread, perhaps coming across a recipe that you might like to try in the process.

One thing that is surprising is how few recipes are repeated – Patten clearly had a good stock of recipes to draw on. Eggless sponge gets repeated (interestingly, while both use the same quantity of flour, the version from The Victory Cookbook uses more sugar and margarine than the one from We'll Eat Again) and there are two recipes for stuffed marrow, though the stuffing varies a little. There aren't the same recipes coming up over and over ad nauseam, though. 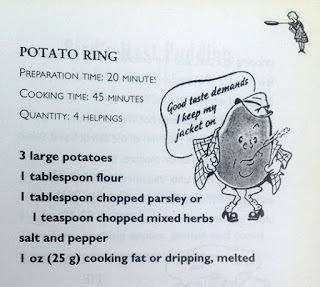 What undoubtedly did get monotonous during the war was the ingredients. Carrots, rhubarb, apples, and the good old spud - personified by the Ministry of Food as 'Potato Pete' pop up over and over, and you have to admire the ingenuity of the people who came up with the recipes. Carrot curry. Carrot cookies. Carrot jam. Carrot sandwiches. Potato scones. Potato pancakes. Potato fingers. Potato parsley cakes. Still, compared to things like whale meat, snoek, and the absolutely grim-sounding sheep's head roll, I'd be happy to peel another bucket of taters.

I will have a go at some of the recipes from this book. The cakes and biscuits, in particular, sound pretty decent, though I'll replace the margarine with butter. And who knows, if we get carrots, carrots and carrots in the vegbox again later in the year, this book will have plenty of suggestions for how to use them. (If only it had some ideas for courgettes...)
Labels: 1940s 1950s food WWII