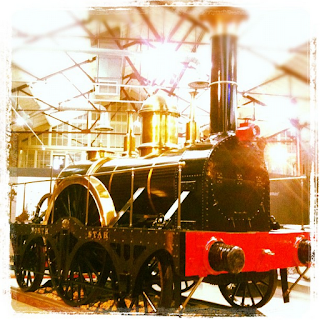 It's a bit surprising that this has taken so long to happen: Swindon, home of the Great Western Railway, is hosting a steampunk spectacular from 24-26 March. The venue is about as appropriate as it gets, as it's being held at Steam, the Museum of the Great Western Railway, which is housed in the old engine works and has a spectacular collection of engines, carriages, and railway paraphernalia.


I haven't been able to find out exactly who is organising it, but posts on steampunk sites make me believe it's been organised by steampunks, for steampunks, and the museum has agreed to include all the daytime stuff in the regular admission price. (There's evening entertainment, but that will cost extra.) Steam's website has a bit of information, but there's much more information about traders and entertainers on the event's Facebook page.

As this is in Wiltshire, it's on my events list of 'What's on in Vintage Wiltshire'. If you're in the county, or just over the borders, click on the tab at the top of this to see what's coming up. And if you know of anything interesting that I've missed, please let me know - I do my best to keep it comprehensive and up to date, but it's a lot of work!

To return to steampunk, I've also noticed that there's a gathering at Coldharbour Mill in Devon on the 6-7 May. Coldharbour Mill is a heritage woollen mill, steam-powered, that's still working to this day. In fact, vintage knitters may know it as the place that spins a number of Susan Crawford's yarns, Excelana in particular. If you're in Devon at that time, it would make a great weekend out.
Labels: events museum steampunk wiltshire